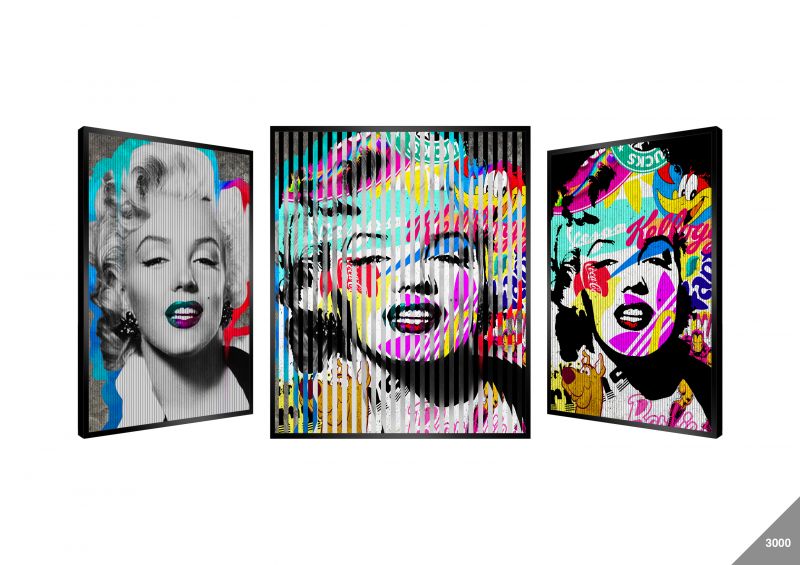 Patrick Rubinstein’s works often feature the major icons and celebrities of the second half of the twentieth century, and this piece depicts the American actress Marilyn Monroe, who has become one of the world’s most enduring figures. When viewed from the right, the work appears to be solely of Marilyn. However upon moving in the opposite direction an assortment of familiar brand logos appear in a myriad of vibrant colours, such as Starbucks and Adidas, the result of Patrick’s innovative process and technique. Through this captivating work, Patrick Rubinstein produces a striking visual statement about the way in which consumerism, celebrities and brands have become intrinsically intertwined in our lives.

Patrick Rubinstein draws his themes from both the past and the present and is inspired by Optical Art and Kinetic Art, genres that play with our perceptions through art.  His works often feature the major icons and celebrities of the second half of the twentieth century and feature an innovative technique, which allows visual variations when the spectator moves around the work while maintaining defined sight of the central image. The result of this is captivating, giving the artworks an animated and perpetually renewed nature. Rubinstein’s art has a striking effect when observed: the image, fixed at first, comes to life according to the movements of the viewer. We become the animator vis-à-vis the unprecedented dynamics of his work, that draw us into a captivating visual experience, and surprises us with every viewing.