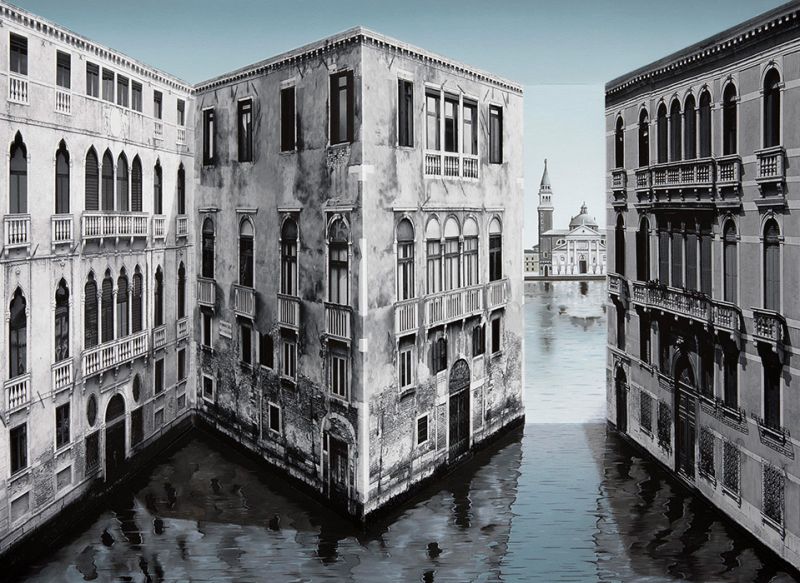 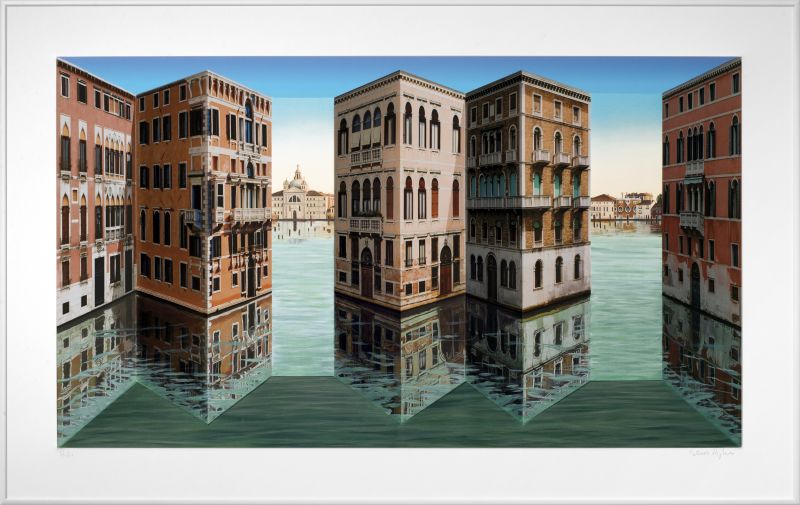 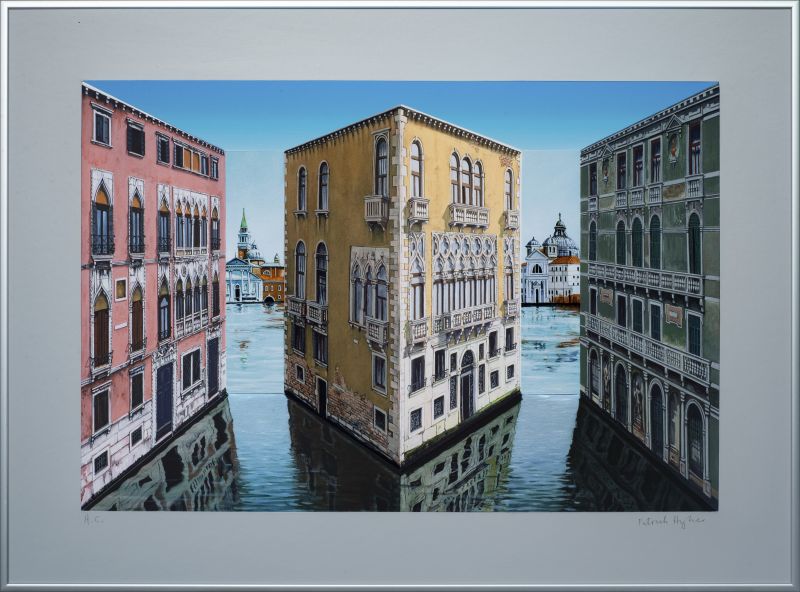 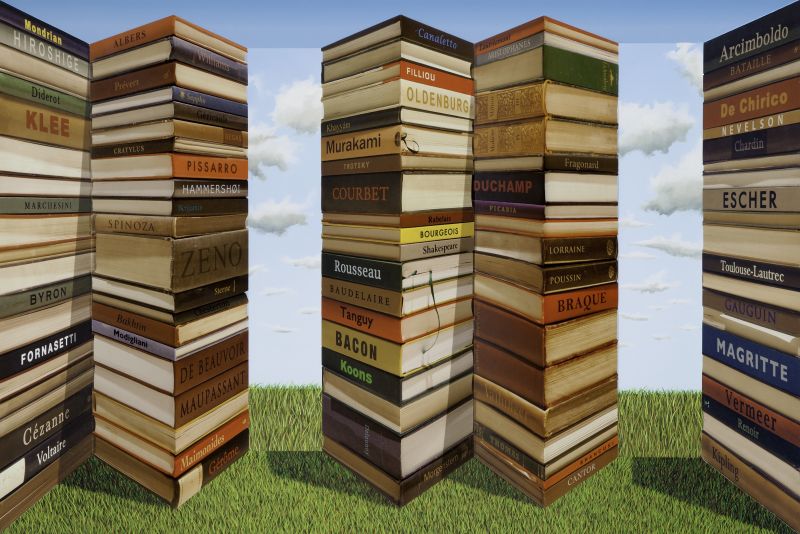 Patrick Hughes, born in England in 1939, held his first solo show in 1961 in London. From the 1980's, he started to explore the difference between perspective and "reverspective". For the last 25 years, his 3-D reverspective paintings have been exhibited around the world and are featured in many public and private collections.

Patrick Hughes creates paintings that come alive through the motion created by optical illusions. Each plane of his pictures shrinks or expands to accommodate the movement of the onlooker, in perfect harmony, like a good dance partner.

His art transports viewers to Venice, to the Great Wall of China, and into museums filled with the greatest masterpieces of contemporary art, to which he pays a playful tribute. But his focus is not only on picturesque places, as his work also explores everyday objects, like toys, and common places like libraries to, quite literally, give onlookers a new perspective on them.

Patrick Hughes uses his ground-breaking sense of perspective as a mean of enabling a strange relationship between the spectator and the picture – a dialogue of sorts. To him, it is about motion and movement.

“I'm not ultimately interested in skyscrapers or picture galleries, they are just a beginning. The beautiful thing to observe is when people are looking at them and moving and, I suppose, thinking and wondering.”

The experience of seeing a Patrick Hughes sculptured painting in reality is to experience unreality and the paradox of illusory space and movement.

For Patrick Hughes, art has been a means of intellectual enquiry rather than an end itself. His paintings are machines designed to change the way we think about the world. The art of representation has always been linked to knowledge and understanding of the external world and the ways in which we perceive it – what we see and how we see. The notion of perspective has been central to the evolution of Western Art since classical times, its principles closely linked to the empirical view of the world, logic, mathematics and geometry. The ability to create a facsimile of the exterior world has been highly prized and perfected at precisely those periods when the knowledge itself has been most eagerly sought and argued over.

Hughes is developing a line of enquiry which has preoccupied generations of European artists. The architect Brunelleschi (1377 – 1446) was one of the first to make an interactive artwork that demonstrated the principle of perspective. He painted a view of a building on a silvered background with a spy hole in the centre corresponding to the vanishing point. The viewer looked through the whole at another mirror that reflected the image including the sky and moving clouds, so increasing the illusion of reality. For contemporary audiences, the effect must have been amazing. It placed the viewer literally at the very centre of the work. It was experimental with a serious purpose but it was also entertainment and this has been a fundamental aspect of Hughes’ work – its ability to capture the attention and imagination of the viewer and involve them in the process of enquiry.

Command of the law of perspective allowed artists to create complex illusions that mimicked reality to an astounding degree. The Camera degli Sposi in the Gonzaga Palace in Mantua by Mantegna (1431 – 1506) for instance, remains an astounding tour de force of illusionistic painting in which solid walls are effectively dissolved by the coherent manipulation of perspective, coupled with the viewer’s expectation – we see what we expect to see and our mind fills in the blanks. Three and two- dimensional elements were combined to dramatic effect in the work of Gaudenzio Ferrari (1484 – 1546) at Varallo, where life size painted figures emerge from the fresco into the viewer’s space.

The Dutch painter Carel Fabritius (1622 – 54) created some extraordinary hybrid works which combine elaborate architectural perspective with foreshortened still-life motifs and figures. His View of Delft with a Musical Instrument Seller’s Stall (National Gallery, London) is amazingly modern in spirit and defied the picturesque conventions of his day. If David Hockney is right, he may have used a camera lucida, an optical instrument, to project the images on to his canvases. His compatriot Samuel van Hoogstraten (1627 – 1678), went a stage further with his three-dimensional peep-show boxes with interior scenes painted on the inside surfaces which look real when viewed through the spy-holes. The fall of light in the scenes corresponds to the actual fall of light on the interior of the box through the open sixth side thus reinforcing the illusion created by perspective. These boxes are perhaps the conceptual ancestors of Patrick Hughes' painted constructions. They rely on the active participation of the viewer and exploit our reflex response to visual stimuli. The knowledge that it is an illusion does not make it a less effective – if anything it makes it more enigmatic and thought-provoking as normal mechanisms for reading space are disrupted.

Like many young artists and poets of his generation, Hughes was inspired by the work of the European Surrealists. The 1950’s and early 60’s saw a revival of interest in Surrealist art, film and literature which became widely available for the first time. Hughes admired Paul Klee for his subversive wit, underlying geometry and experimental drawing, also Rene Magritte, for his exploration of the pictorial paradox – his way of laying bare the process of perception. In Magritte’s work, The Human Condition 1 (1933), we are confronted by a painting of an interior in which we see another painting of an interior on an easel depicting the implied view through the curtained window. It encapsulates the idea that we experience the world only via a system of elaborate constructs. Hughes says it is his desert island picture, but states "I don’t particularly like what Magritte’s paintings look like, I like what they think." (Interview with Murray McDonald, August2003). Hughes shares the surrealist fascination with the absurd and oxymoronic, relishing Milton’s description of the fires of Hell as: "No light, but rather darkness visible." (Paradise Lost, Book 1. 1, 61) Perhaps the equivalent of Meret Oppenheim’s Fur Cup and Saucer (1937) is Hughes’ Circular Train (1971) trapped in its funny, pointless gyrations.

Hughes' paradoxical paintings are visual one-liners designed to raise a smile and to question the immutable constants through which we form our view of the world – hard and soft, near and far, up and down, in and out. Each one is challenges in turn: light becomes solid, interiors and exteriors inter penetrate, distant objects protrude disobediently into the viewer’s space. In the screen-print,Déja Vu (1976) the schematic image of the receding road is seen through what we assume to be a rear view mirror while the inner frame of the print becomes a windscreen. The correspondence of the two images implies motion as the white lines vanish into both horizons. In Realistic Paint (1977) the surface of the picture is cut away to expose the real painted wall behind it. The elliptical hole is given three-dimensional value by the lines of the floor boards – so we read it as a pool of paint seen from an oblique angle. They are jokes, but in the words of the Georgian satirist, Charles Churchill, "A joke is a very serious thing." (The Ghost, book 4). For Hughes, they are a means of analysing the way we think about the world. The famous rainbow works explore the realm of the paradox in a systematic way. The rainbow is taken through a series of permutations that contradict its nature. The cipher of prismatic light becomes a solid, casts a shadow, appears at night, enters rooms but its associations are so fixed that it retains its value as a signifier. Over one million of the rainbow cards were sold during the 1970’s, integrating seamlessly into popular culture.

His discovery and development of reverse perspective gave Hughes an even more potent mechanism for loosening the grip of experience on the viewer's imagination. It relies on the fact that the human brain and eye are adapted during early childhood to apprehend space in terms of linear perspective – converging parallel lines imply recession and distant objects appear smaller. Reverse perspective exploits and simultaneously denies this learned response. The brain will persist in decoding the information in the customary way even though it knows the information is wrong. Hughes also uses painted cast shadow to underpin the illusion, creating convincing synthetic environments that ensnare the eye. A particularly elaborate example of this is seen in Billy Bean’s Silly Machine (1995) where the interior appears to be lit from a light source in the adjacent room. He naturally favours the architectural themes which lend themselves to perspective manipulation – gallery interiors, libraries and high-rise buildings – familiar shapes and places which are ingrained in out consciousness. His use of panoramic landscapes, beautifully painted with atmospheric recession again reinforces the perception of actual space. In Steel Sunflowers (2003) the prison doors appear to be open (or closed) on a radiant Provencal landscape to present opposing visions of freedom and confinement. A similar conjunction of opposites occurs in Nature and Culture(2000) where the control panels are set against exquisitely detailed mountain scenery. Because they are slowly and partially revealed, the eye is compelled to explore these landscapes actively and urgently. Over the years, Hughes has gradually refined the geometric structure of the three- dimensional works to make them operate to maximum effect. The longer works of five or six projections fill the viewer’s peripheral vision. Often, the content of the deserted libraries and galleries offer insights into the artists own creative imagination – the books that have inspired him are on the shelves, the paintings on the walls. In These Are a Few of My Favourite Things (2003) he gives himself a mini-retrospective – a manifesto of his ideas.

There are no human figures in Hughes' paintings. They are like empty stage sets ready for us to enter and explore. Like Duchamp, Hughes believes that the observer is 50% of the art work. The viewer is empowered to interact with it and to explore its effects and implications in a direct way on a personal level. During the exhibition of his work in Birmingham in 2002, it was enlightening to seen the visitors moving back and forth in front of the painted constructions in a kind of contemplative dance. The appeal of the works was not only visual but also intellectual and many visitors returned again and again to study them and left with their views of the world and its immutable rules subtly changed.

1993
Made in Perspective, Flowers East at London Fields, London
The Shadow of War and Other Works, Angela Flowers Gallery, London

1992
Beyond the Rainbow, Flowers Graphics, London 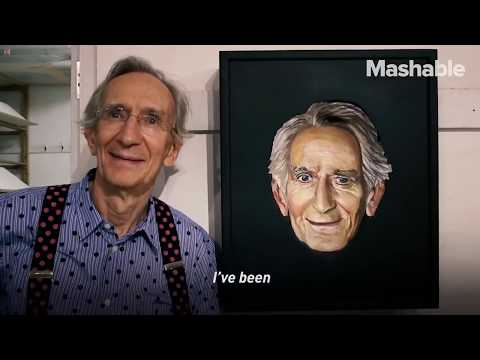 Patrick Hughes' Perplexing Perspectives
Patrick Hughes
Patrick Hughes creates paintings that come alive through the motion created by optical illusions and makes viewers interact with his works in an active way. Each plane of his pictures shrinks or expands to accommodate the movement of the onlooker, in perfect harmony, like a good dance partner. Discover more about his technique and his philosophy in this short clip!