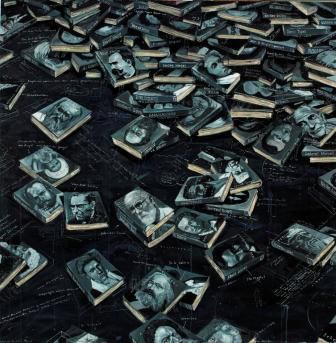 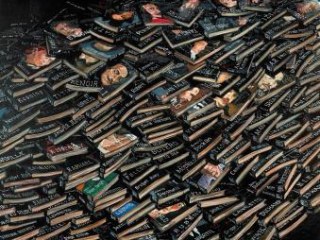 Gusmen Heriadi started his career as an illustrator for the alternative newspaper Pualiggoubat Mentawai, during which he encountered a variety of visual material that he experimented with to create a pastiche of symbols and meanings. Books, newspapers, and other textual elements are recurring motifs in his work, which many people assume to have been influenced by his early life. Gusmen uses these motifs to communicate his highly instinctive and personal vision of cultural life in Indonesia. The objects featured in his paintings are often metaphors of his feelings and inner debates about the issues of culture and tradition in a modern society. Most of his works are products of his dreams, his responses to life, and his philosophical views. These philosophical and critical thoughts are the result of cultural forging and family habit, as well as influences from the breadth of his artistic life and pursuit. His paintings frequently depict objects that emblematize the ever-changing perspectives towards the issues of culture and tradition in modern society. Gusmen's heavily semiotic approach also leads one to realize that art is an essential medium through which one may contemplate human existence.